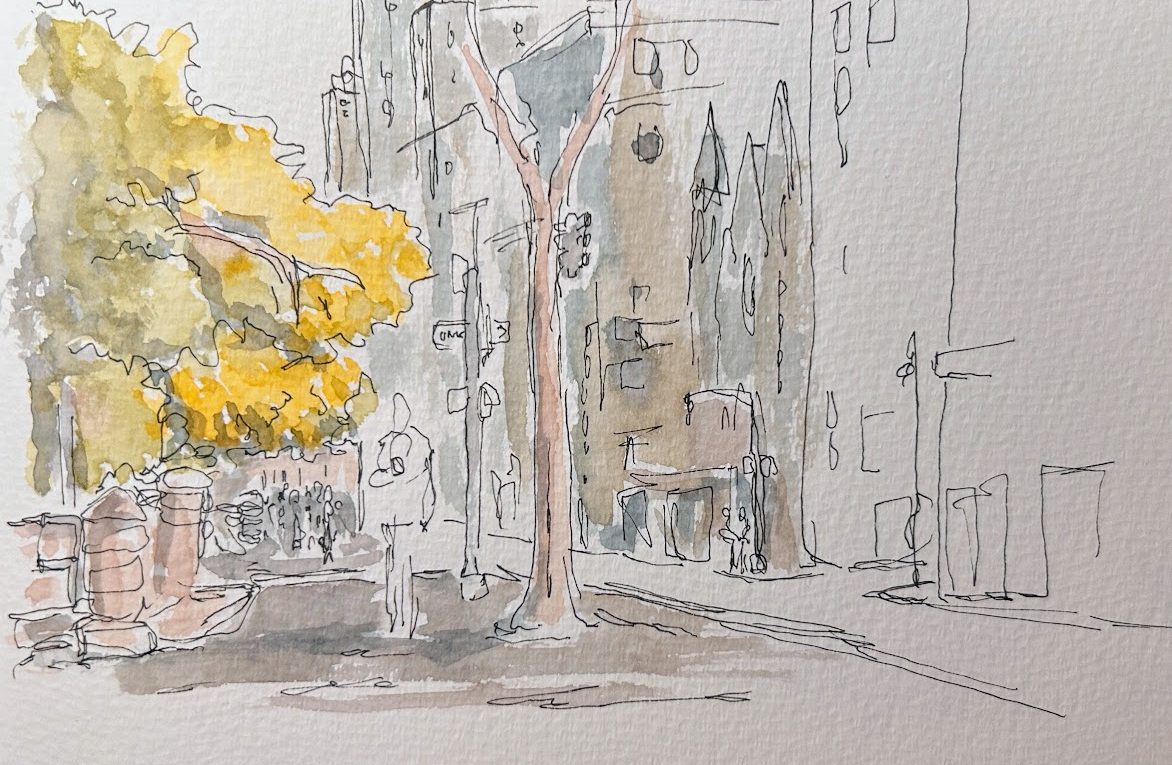 I alluded in my previous post that November had us primed for some travel afar and away, and in as much I had picked up a new sketchbook for that specific purpose.

Over the recent long weekend, the family and I flew across the continent from our frozen little Canadian city, to the big city, the big apple, Manhattan in New York. It was a weekend filled with adventure, food, walking, Broadway shows, museums, more food, parks, and tall buildings. Five days of urban vacation fun, punctuated by no less than seven sketches by yours truly.

I tried to be bold when I sketched, too.

On the Sunday morning, while the family was still snoozing away the early hours, I packed up my gear and walked the few blocks north of the hotel and into Central Park.

Over the course of three hours on my own, I found breakfast, drank a coffee, and stopped three times to pull my sketchbook and pen from my pack and draw what I saw.

The last of these, the feature image of this post, was drawn while sitting on a bench around Central Park West and 66th Street, a long street running along the west edge of the park and lined across the avenue with beautiful and expensive condominiums. Literal million dollar views.

I've been reluctant to dive in headlong with ink-only sketches, almost always warming up my blank page with at least a few pencil shapes to build some confidence for those more permanent lines. That was a luxury I didn't give myself on vacation, tho, whether because I often had a family sitting nearby waiting on my art or just because I was trying to fill the page in the minimum of time for a dozen other reasons. I had thought such haste would leave me unhappy with the final results, but I have been finding a new confidence in ink-only drawings and a life and vibrance that is emerging on accident of only having a single chance to draw the scene rather than tracing over my pencil lines. And I like it, and think I will do more of it.

My bench wasn’t worth nearly so much, but it proved a creatively fertile outpost.

Given another hour, a day, a lifetime it felt like something I could have sketched in the most brilliant of detail and complexity. But I sat down for a mere thirty minutes, give or take, and quickly tried to capture the late-autumn scene. Shapes. Lines. Feeling. Warmth. Movement of the hundred or so people who walked by me, many looking down at my page and a few stopping to ask for directions that I was scantly able to provide. My pen moved as fast as it could across my sketchbook resting on my lap, trying to store that moment into a few lines of ink on paper.

In my little city home there are a million scenes that could be sketched, but being somewhere new and vibrant and alive in a way that New York is just so unlike where I live, it was gnawing and crunching as creative fire.

Travel was my muse for five days, and more than once lit something inside that I think I’ll find hard to rekindle at home… especially with half a meter of snow on the ground.