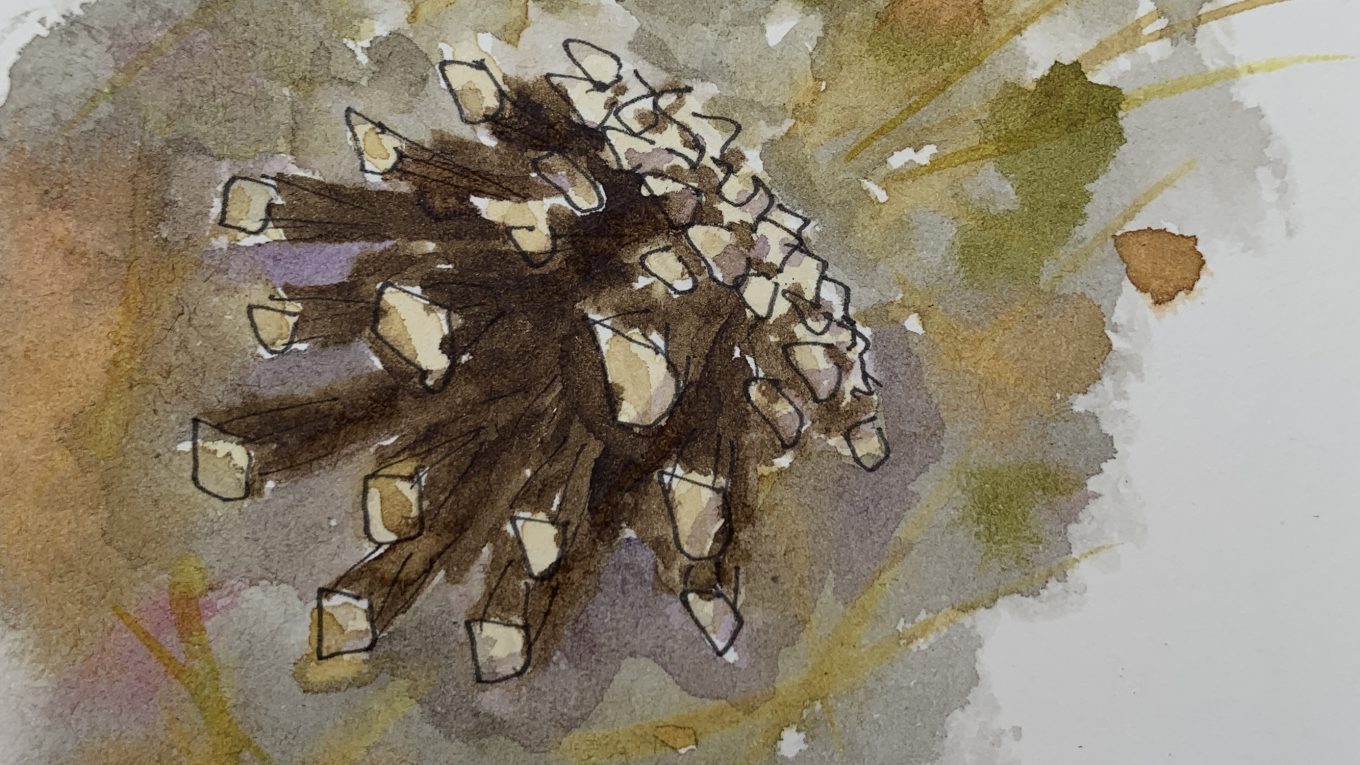 Autumn arrived like an express train, passing between the trees with a gust of chilly wind and leaving behind a noticeable change in the mood. The leaves changed colour with its arrival, folding from a mature, ripe green hue to patterns of orange and red and yellow and brown.

These are colours to which I have learned this year to give new names: ochre, umber, rust, and olive.

While I spent hours of my weekend dabbling in the autumn colours of my watercolour paint sets, looking to match warm hues with the visuals I held in my mind and on the photo roll of my phone after a meandering walk through the nearby river valley, I found a better success in the simplicity of the lingering remains of summer.

Between snapping epic photos of billowing autumn leaves patched against azure skies, I’d also gathered a small collection of photos of oblivious little pinecones still hanging (or recently fallen) from the boughs of the various evergreens.

Repetition is the king of practice, though painting the same thing over and over again could quickly become tedious. The notion of a study unlocks the frustration of repetition from the benefits, at least I think so. A study as I've defined it, is the tackling of a set of similar subjects with a common theme, similar characteristics or some other factor in common. For example, I took a stroll through the local park and snapped a half dozen photos of various pinecones. Some were dangling from branches while some were on the ground. Some were young and green while others were dried up and cracked open. Four of those photos became the basis for my study, creating four individual paintings with four similar styles. Yet in the spirit of repetition, I mixed one set of paint, used one spread of paper, and painted each in quick succession taking the micro-lessons learned from each go inform the next.

Take a pinecone for example. In my mind I have an idealized image of a pinecone. It’s shape, colour, and texture are all locked in as a mental symbol of a pinecone.

I didn’t draw that symbol. Rather I drew four pictures of the pinecones I found in my park on my walk, not a one of them really even matching the symbol I held in my head of what I was drawing. And those pinecones were not brown; the hues I used were sepias and ochres and olives and umbers, warm autumn shades that pull the cool breeze out of the air and remind those standing among the scattered remains of summer that winter is just a different shade.